The writer starts with reference to Franz Kafka’s two short stories, A Crossbreed and In the Penal Colony. According to her, both works are centered around something that the person in question, both the officer in In the Penal Colony and the first-person narrator in A Crossbreed, cannot free himself from. It appears that their existence is intertwined, mutually dependent on one another. The involuntary, mutual dependence is also evident in the story about the crossbreed, where the narrator feels that he cannot put down the hybrid creature, that it is a belonging he is unable to part with.

One may question the necessity of this deadlock: why will he not free the crossbreed from its sufferings? Why is the owner so dependent on this curious other? A possible answer is: “It is a legacy [Ger. Erbstück] from my father.” The short story revolves around the question of inheritance. This is also where the theme of dependency arises, of what sticks to a person whether he likes it or not. The narrator feels a responsibility towards the crossbreed, a creature he must take care of regardless. Kafka scholar Peter-André Alt reads the theme of legacy in A Crossbreed in connection with a father-son relation, a recurrent theme in Kafka’s oeuvre. In another (and perhaps broader) perspective, one may understand this legacy as something that transcends the relationship between father and son, such as that between two species: between animal and human.

Where Do We Humans Come From?
Sigmund Freud, in his culturally oriented studies (Totem and Taboo, 1913, Civilization and its Discontents, 1930, and Moses and Monotheism, 1939, to mention the most significant), tends to connect the psychological development of the individual to the evolution of an entire species. A central thesis for Freud is thus that ontogenesis (the development of an individual) reflects phylogenesis (the evolution of a species). Each and every one of us goes through, or attempts to pass through, what Freud calls the Oedipus complex. This process is part of the child’s psychosexual development, where two components, aggression and sexuality, play an integral role in the rivalry and identification with both mother and father. In his research into social anthropology, Freud has a similar thesis concerning mankind as a species. He imagines how there existed, in ancient times, a primordial father, and that this primordial father was murdered by a band of brothers, founded upon the dynamics of rivalry and identification: rivalry with the primordial father and identification with one another in opposition to the supreme father figure. In the aftermath of their parricide, the tribe becomes free to form a new and unifying order. Their bond to the primordial father then gets marked by another form of identification, not just horizontally within the band of brothers, but vertically: through his death, the original father becomes the common dominator for a nascent civilization. The law of the primordial father is thus internalized, thereby becoming a part of the new order and collective morale. An analogous mechanism is at play when the child passes through the Oedipus complex. The child considers its father a rival, a rivalry that is a necessary a stage in the separation from its parents, and consequently a necessity for the development of a person’s identity. During this separation, the law of the father is also internalized as part of the individual’s superego (Ger. Über-Ich),v a person’s moral code, so to speak. We thereby see how the formation of society and of the individual superego, according to Freud, both depend on the same mechanisms, and further, how each individual mirrors the original development of the (human) species.

Haunted by the Animal
Can we then use the Freudian dynamics between individual and species to understand that of the human and the animal, and further, the link between Kafka’s first-person narrator and his crossbreed? In the first case, at least, the parallel seems warranted. Aggressiveness and sexuality, traditionally connected to animal drives, are, according to Civilization and its Discontents, sacrificed (i.e., repressed) on the altar of civilization. The way man invents himself as a species, by distancing himself from his so-called animality, can also be seen as a part of the human evolution as a species. In my opinion, this phylogenesis is also reflected on an ontogenetic level in Freud’s texts: it is no coincidence that the presence of animal phobia is stressed in several of Freud’s case studies.

In civilization, man cannot be freed from his primordial drives. Especially, repression of aggressiveness returns in the form of an uneasiness within culture. Like Kafka’s crossbreed, man’s animal drives are an innate legacy, something man cannot let go of without great pains. Why should the return of the drives be experienced as something unpleasant, or worse, in the form of a phobia? Should it not be possible to come to terms with what has been, after all, and perhaps still remains, a part of human existence?

To help us understand the return of the repressed, Freud’s concept of das Unheimliche may be of use. A literal translation of das Unheimliche into English would sound something like ‘the unhomely’, which is not the proper term, since it misses one of the concept’s key meanings, namely that of something scary. In Das Unheimliche, Freud discusses the etymology of the word unheimlich, stressing the connection between the ‘homely’ (Ger. heimlich) and the ‘unhomely’ (Ger. unheimlich). This link is reminiscent of ‘familiar’ and ‘unfamiliar’; heimlich is something near and dear, whereas unheimlich is something strange, something coming from without. Furthermore, Freud posits that what is unheimlich is linked to what is heimlich: das Unheimliche seems uncanny because it represents something familiar that has since been repressed—perhaps our inner sexual and aggressive wishes, incompatible with our constructed ego. When these repressed elements return, the effect is all the more horrifying. Think only of the infamous doll in countless horror movies, of the music box stuffed away in the attic or the murderous clown!

Kafka’s Inherited Hybrid
In the work of Kafka, as in psychoanalytic theory, we are dealing with an animal legacy that mankind is unable to leave behind. We are left with the impression that these calm animal eyes have been transformed into human eyes by the end of the story. First, the owner describes how he feels that the animal is trying to whisper something into his ear, whereupon the animal looks at his face to see if the message has been received, looking to see how the message affects the owner. This depiction of the animal’s humanlike characteristics comes at the point where the story takes a more serious turn: from describing the play and laughter of the narrator to describing the pain and tears of the animal. The seriousness culminates in the animal’s human-like gaze: the animal pleading its owner to end its sufferings.

The narrator owns the crossbreed and causes the animal pain by keeping it alive as part of his own existence, and of the narrator’s legacy. The crossbreed is in the power of the narrator, and before that, in the possession of his father, and before that (most likely) the property of the grandfather, and so on. A Crossbreed moves from merriment (the owner’s laughter) onto sadness (the animal’s tears), and—in a broader sense—to violence (the caged animal). The crossbreed is a mix, on one side, of the predator, and, on the other, of its prey. The painful aspects of the story are most obvious towards the end, but to a certain degree this restlessness and uneasiness is continually present. 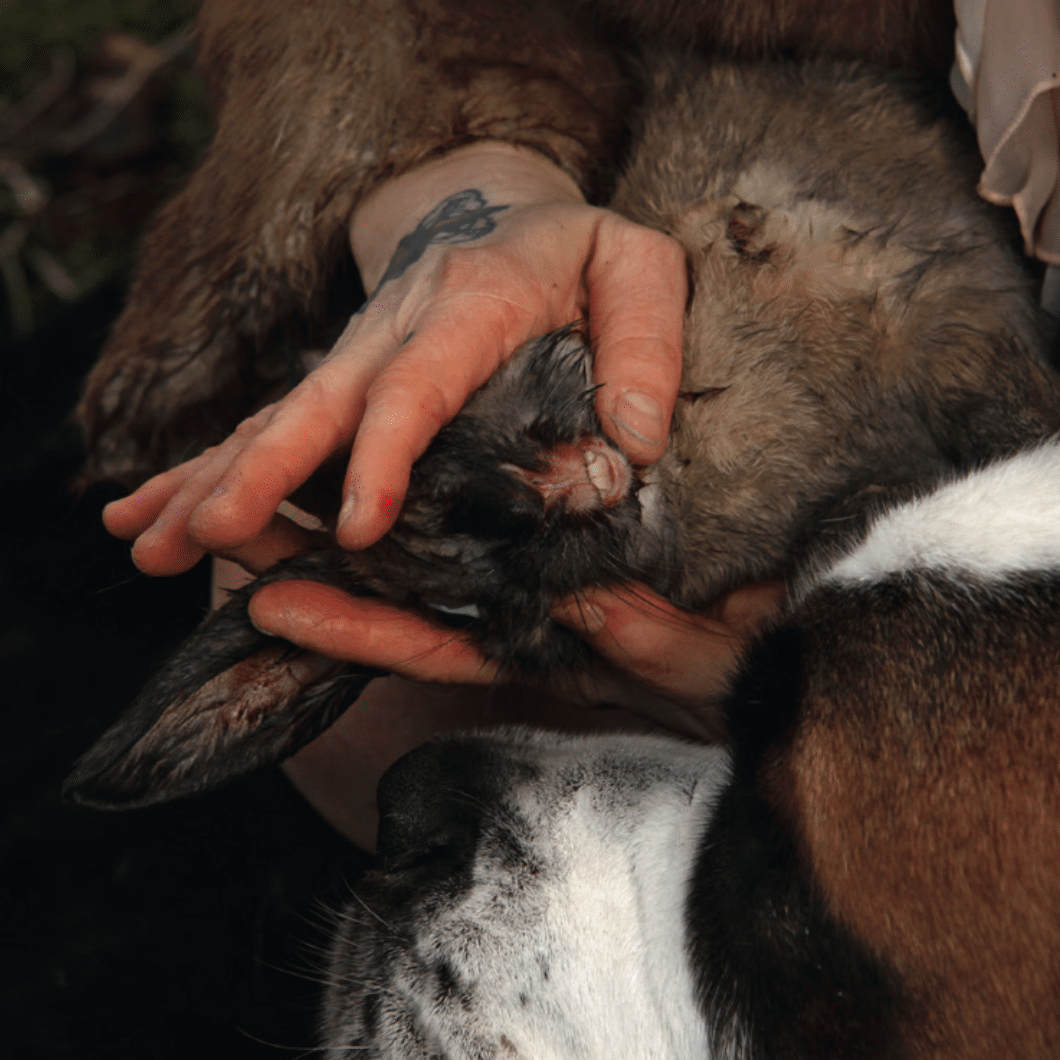 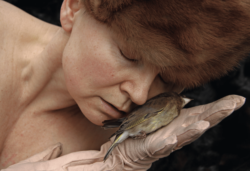 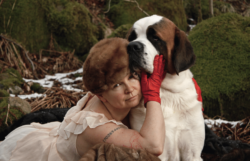 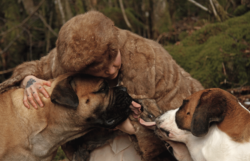 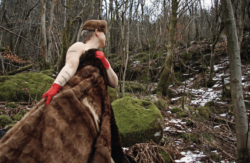