The Practice of Everyday Life

The Practice of Everyday Life

“When one does not have what one wants, one must want what one has” … “I have had, you see, to resort more and more to very small, almost invisible pleasures, little extras…. You’ve no idea how great one becomes with these little details, it’s incredible how one grows.”—W. Gombrowicz, Cosmos (Paris: Gallimard Folio, 1971), 165-168; originally Kosmos (1965); Cosmos, trans. E. Mosbacker (London: Macgibbon and Kee, 1967).

The aim of this research is investigation of the ways in which users—commonly assumed to be passive and guided by established rules—operate. What is important in this study is that everyday practices, “ways of operating” or doing things, no longer appear as merely the obscure background of social activity, and if a body of theoretical questions, methods, categories, and perspectives, by penetrating this obscurity, make it possible to articulate them. Analysis shows that a relation (always social) determines its terms, and not the reverse, and that each individual is a locus in which an incoherent (and often contradictory) plurality of such relational determinations interact.

Michel de Certeau’s attempt in this book is to make explicit the systems of operational combination which also compose a “culture,” and to bring to light the models of action characteristic of users whose status as the dominated element in society (a status that does not mean that they are either passive or docile) is concealed by the euphemistic term “consumers.” Everyday life invents itself by poaching in countless ways on the property of others and de Certeau finds the cultural consumer of everyday life along with acts of “producing” or “doing” something. The “making” in question is a production, a Poiesis—but a hidden one, because it is scattered over areas defined and occupied by systems of “production” (television, urban development, commerce, etc.), and because the steadily increasing expansion of these systems no longer leaves “consumers” any place in which they can indicate what they make or do with the products of these systems.

So, according to de Certeau, production corresponds another production called “consumption.” This latter insinuates itself everywhere, silently and almost invisibly, because it does not manifest itself through its own products, but rather through its ways of using the products imposed by a dominant economic order. De Certeau also pursues the same problem in linguistics and points to the use made by the “common people” of the culture disseminated and imposed by the elites producing the language. Now, the degree of similarity and difference between these two types of productions (or first and secondary languages) could merely be gauged through analysis of the its manipulation by users (process of its utilization) who are not its makers. Speaking operates within the field of a linguistic system; it effects an appropriation, or reappropriation, of language by its speakers; it establishes a present relative to a time and place; and it posits a contract with the other (the interlocutor) in a network of places and relations. This is to say that users make innumerable and infinitesimal transformations of and within the dominant cultural economy in order to adapt it to their own interests and their own rules. We must determine the procedures, bases, effects and possibilities of this collective activity.

In his explanation, de Certeau refers to Michel Foucault’s Discipline and Punish. In this work, instead of analyzing the apparatus exercising power, Foucault analyzes the mechanisms (dispositifs) that have sapped the strength of these institutions and surreptitiously reorganized the functioning of power. If it is true that the grid of “discipline” is everywhere becoming clearer and more extensive, it is all the more urgent to discover how an entire society resists being reduced to it, what popular procedures manipulate the mechanisms of discipline and conform to them only in order to evade them, and finally, what “ways of operating” form the counterpart, on the consumer’s side, of the mute processes that organize the establishment of socioeconomic order.

In reply to this ancient question that what is an art or “way of making” and its combination with his own theory which considers consumption as sort of production, de Certeau makes use of “popular culture.” According to him, popular culture, as well as a whole literature called “popular,” present themselves essentially as “arts of making”—as combinatory or utilizing modes of consumption. They bring into play, a way of thinking invested in a way of acting, an art of combination which cannot be dissociated from an art of using. Marginality is today no longer limited to minority groups, but is rather massive and pervasive; this cultural activity of the non-producers of culture, an activity that is unsigned, unreadable, and unsymbolized, remains the only one possible for all those who nevertheless buy and pay for the showy products through which a productivist economy articulates itself. Marginality is becoming universal. A marginal group has now become a silent majority.

As unrecognized producers, poets of their own acts, silent discoverers of their own paths in the jungle of functionalist rationality, consumers produce through their signifying practices something that might be considered similar to the “wandering lines” drawn by the autistic children: “indirect” or “errant” trajectories obeying their own logic. these trajectories form unforeseeable sentences. Although they are composed with the vocabularies of established languages (those of television, newspapers, supermarkets, or museum sequences) and although they remain subordinated to the prescribed syntactical forms, the trajectories trace out the ruses of other interests and desires that are neither determined nor captured by the systems in which they develop.

The everyday life practices produce without capitalizing and taking control over time. From TV to newspapers, from advertising to all sorts of mercantile epiphanies, our society is characterized by a cancerous growth of vision, measuring everything by its ability to show or be shown and transmuting communication into a visual journey. It is a sort of epic of the eye and of the impulse to read. For the binary set production-consumption, one would substitute its more general equivalent: writing-reading. In reality, the activity of reading has on the contrary all the characteristics of a silent production: the drift across the page, the metamorphosis of the text effected by the wandering eyes of the reader, the improvisation and expectation of meanings inferred from a few words. But since he is incapable of stockpiling (unless he writes or records), the reader cannot protect himself against the erosion of time (while reading, he forgets himself and he forgets what he has read). He insinuates into another person’s text the ruses of pleasure and appropriation: he poaches on it, is transported into it, pluralizes himself in it like the internal rumblings of one’s body.

Ruse, metaphor, arrangement, this production is also an “invention” of the memory. Words become the outlet or product of silent histories. The readable transforms itself into the memorable: the viewer reads the landscape of his childhood in the evening news. A different world (the reader’s) slips into the author’s place. This mutation makes the text habitable, like a rented apartment. It transforms another person’s property into a space borrowed for a moment by a transient. Renters make comparable changes in an apartment they furnish with their acts and memories; as do speakers, in the language into which they insert both the messages of their native tongue and, through their accent, through their own “turns of phrase,” etc., their own history. In the same way the users of social codes turn them into metaphors and ellipses of their own quests. 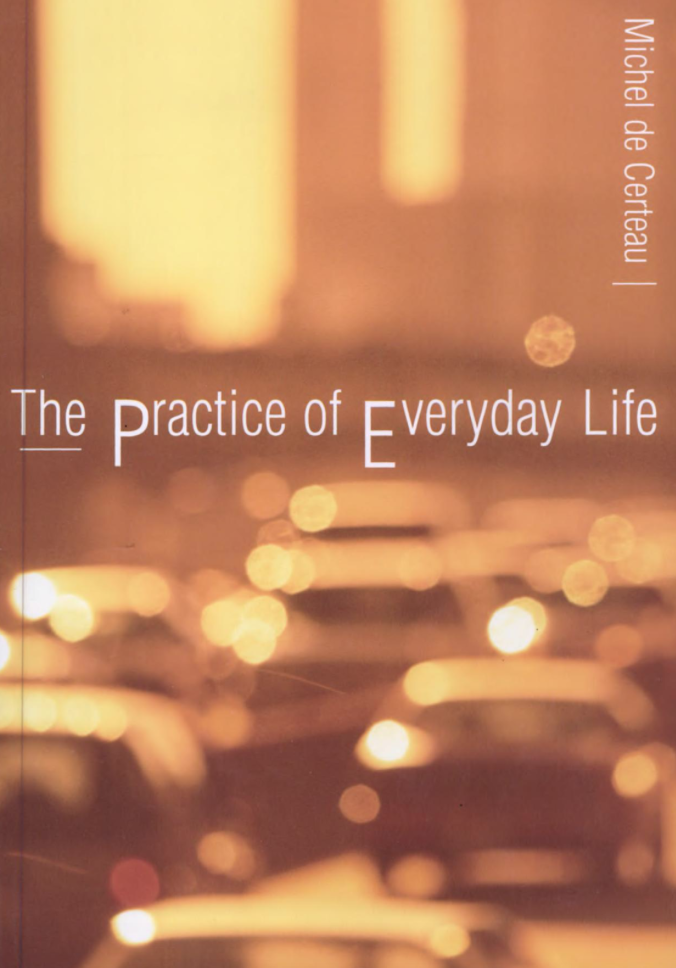 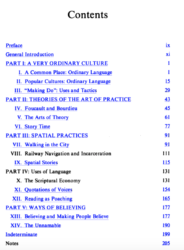