Roughly in the center of the room, between the columns, a mound of glossy fur lies on the parquet floor. Surrounding it are several transparent balloons, which at first glance look more like soapy bubbles or giant frog spawn—pearls, even. A rustling comes from the mound of fur, generated within by a kind of wriggling movement. As this internal nuzzling and burrowing intensifies, the noise becomes a crescendo of squeaks, created by the friction of two rubbery surfaces. Another hole opens up, and a translucent milky white object pushes its way through. It eventually pops out, floats a little, and descends gracefully to the ground before bouncing gently on the floor, coming to a temporary rest by the edge of the dark brown fur. Upon first encountering this scene—the amorphous expanse of pelt (muffling the movements and sounds emanating from it) against the staid opulence of the room—one notices also the configuration of the audience, who have arranged themselves on chairs in a surprisingly precise semi-circle facing the object of their attention.

Deep underwater, sound is dampened. All that can be heard is the slow, measured breathing of the diver sucking in and blowing out, and the sound of bubbles of air ascending to the surface after every exhalation. Looking closer, movement can be detected. A creature is nestled in the center of a cluster of algae and barnacle encrusted rocks and stones. The aquatic being is camouflaged with a pattern and coloring that mimics its surroundings. Its head appears to be soft and bulbous, gently undulating with the waves. In fact, this is not the head, but a mantle, protecting the reproductive organs of the body. Zooming in, the camera reveals that the creature may be uncomfortable. It is backed up against one of the stones, continuously re-adjusting its position. Its long tentacles are rarely visible, only occasionally unravelling, and then curling swiftly back in towards the confines of the body: a secretive, internalizing motion. The siphons occasionally blow out with a great velocity. They seem to indicate that the creature has a continuously reoccurring build up of pressure to release. From beneath, just where the tentacles swirl inwards, clusters of translucent pearls waft out, as though they were puffs of smoke, or a diaphanous undergarment lifted up by the wind. These are the eggs. Those falling free of the mother’s charge become vulnerable, lost to the ocean.

Watching the footage of the octopus is somewhat uncomfortable. It is impregnated by the sense of waiting, of the tiresomeness and tirelessness of the job. The mother must wait upon her precious young until they are hatched. They become her sole obligation. She must withstand weeks and months of incubating the eggs. During this period the mother cannot go hunting, and therefore cannot eat. Starved and emaciated, mothers usually die shortly after the young have hatched. Some may not even last this long. It is the tiresomeness of waiting that the viewer experiences in much performance art; the feeling of being held in suspense, and the sensation of this tension slowly dispersing. It demonstrates the discomfort of the body in waiting. This can often be sensed in the audience, as their energy ebbs and flows. Such is the existence of the octopus as she watches over her eggs.

Things unravel and develop over time. During the course of hours, days, weeks or months, we may experience pain and frustration, boredom and impatience, as much as joy and pleasure. At the beginning of spring, I am tired of winter. My ability to tolerate the cold and the dark has weakened. The first signs of spring, such as lighter evenings and the odd crisp, sunny day, make me long for the comfort of summer: as yet far away. On a smaller scale, it is this way for me every month. A lull in energy occurs while the womb is being sloughed off. It feels like being immersed an aquatic world. My limbs become heavy, and I awake from sleep as though drugged, still halfway in the world of dreams. Dreams become more apparent, and it is harder to extract their strange emotional sensations from my public existence in the physical world. In the very last couple of days, during the transition between the old and the new cycle, I begin to feel impatient. Often, I cannot sleep on the final night of my period. It is a long, restless night—seemingly endless—as I count the hours and minutes go by. My anxiety on these nights is always charged with a sense of excitement and apprehension about the month ahead. With the coming gift of renewed energy, there is always much to accomplish, but only limited time. As I watched and waited for each balloon to make its debut appearance, I experienced these feelings to some degree. I stayed on, despite the discomfort, because I had become invested in the deflation of the object.

I cannot remember exactly how the transformation occurred. I noticed when the object appeared to be entirely devoid of balloons. It had become evident that there was a human figure, now small and insignificant, beneath the rumpled rug of fur. I realized that the dark brown pelt had risen up in the middle, indicating that the body inside was now perpendicular. The fur seemed to peel away from the figure. From the central orifice, a head appeared. It was entirely covered in sandy-colored fur. It was a little like a lucho libre mask, but also reminiscent of a lioness. It had no eyes and no visible mouth. This was horrifying. It was a creature reliant solely on its sense of smell: breathing, feeling, but not speaking or seeing. How could such a beast ever be satiated, with no mouth to eat? As the fur fell to the ground, the figure was fully revealed: it was the voluptuous body of a woman, wrapped in a black satin dressing gown. She stepped tentatively out of the crumpled layers of fur lying at her feet, and put on a pair of black leather high heels. I took a moment to appreciate such a well-turned ankle. The shedding of layers had provided me with a welcome distraction. Casting my eye back up to the action, I discovered that the figure was now putting on a pair of tightly fitting red gloves. In the animal kingdom, red is associated with threat. It suggests anger and violence, as it is the color of freshly drawn blood. It is also a symbol of sex and sexuality. The hands of this sightless creature are both sensually alluring and threatening. Gloved hands can be the perpetrators of heinous and traceless crimes, as much as they protect the soft flesh of the palm within. She appears vulnerable in her blindness, and her steps are cautious. I remain apprehensive. I cannot conceive of her next action. It is entirely unpredictable. Metamorphosis is transformation, and in transformation, one thing must end (at least temporarily) for another to come into being. Conception is metamorphosis. Birth is metamorphosis. Death is metamorphosis.

Camille Paglia [feminist and social critic] conjures up the image of Hecate, who in some descriptions has three heads, one of which is of a lioness. There is another goddess who bears the head of a lioness: the ancient Egyptian deity Sekhmet. I am about to digress here: into the tale of this other goddess, and into the narrative of another woman. Through this text on Rita Marhaug’s work, I wish to give voice to the story of Mona Eltahawy. During the uprising against the Mubarek regime in Cairo in November 2011, the journalist was captured, beaten and sexually assaulted by the police. The attack left her with two broken arms, which she believes were injuries directed at her career as a writer. She states ‘I decided to celebrate the healing of my bones by getting tattoos, because the healing of my heart would take much longer.’ One of these tattoos is in the likeness of Sekhmet, whom she describes as the goddess of retribution and sex. Sekhmet’s wrath avenging Ra against humanity was so bloodthirsty that it had to be placated. The priestesses lured her away by creating a mixture of beer and pomegranate juice, which they spread across her path. Seeing what she thought was blood, she lapped it up. As she became intoxicated, her anger was dissipated and became lust. The destructive drive was transformed into an equally powerful creative and reproductive urge. This tale is representative of many metaphors relating to the cyclical nature of life, death and rebirth; but it is more than that. As Eltahawy says, ‘Sekhmet also represents the dark side to femininity that we have often seen denied. Cultures that have goddesses allow this dark side. It is not just a dark side, but also a motherly side.’ Let us not forget the motherly side, for mothers have the unique power of bringing an individual life into being through their bodies. It could also be interpreted that their bodies hold the secrets of death; the onset of the menses represents the death of the child, and subsequently the menopause represents in turn both the death of the reproductive phase and the birth of another. These transitional periods in a woman’s life can, at times, be marked by rage and confusion. Instead of damping this down with the placating influence of estrogen, perhaps we should focus on embracing this anger as the necessary destructive force which lays the path bare and paves the way for change. In the aftermath of change, we shall then deserve and be ready for the orgy of excess that will set the seeds for the creation of new life. Eltahawy has not been silenced by the breaking of her arms. In fact, it appears to have strengthened her determination to speak out and be heard.

But I return to Marhaug’s work. She was at once instinctive, sensing, animalistic, and doubting, faltering, vulnerable. She was both prey and predator. She sat down, facing towards the audience. Here she positioned herself with one leg crossed over the other, just like me, just like several others. The beast had, for this moment, become human. Or perhaps, sitting in a mirror position to the beast, we could see ourselves in her. It could be surmised that we constantly mediate animalistic drives with conscious, socially conditioned behaviors. It may be that we are ashamed of some aspects of our animalistic nature, which appear not to conform to the prevailing expectations of society. The ability to switch between modes, to be consciously aware that both are in existence as we go about our daily lives, could be understood to give the individual a revolutionary power. This is the ability to slip between worlds; to let go of shame as we allow the beast to lick away ‘skin after skin’, and to revel in those crepuscular machinations of the body and drives that push us further on into each new cycle of development. This is to create the possibility of re-emerging into a renewed perception of what society and we ourselves can be. 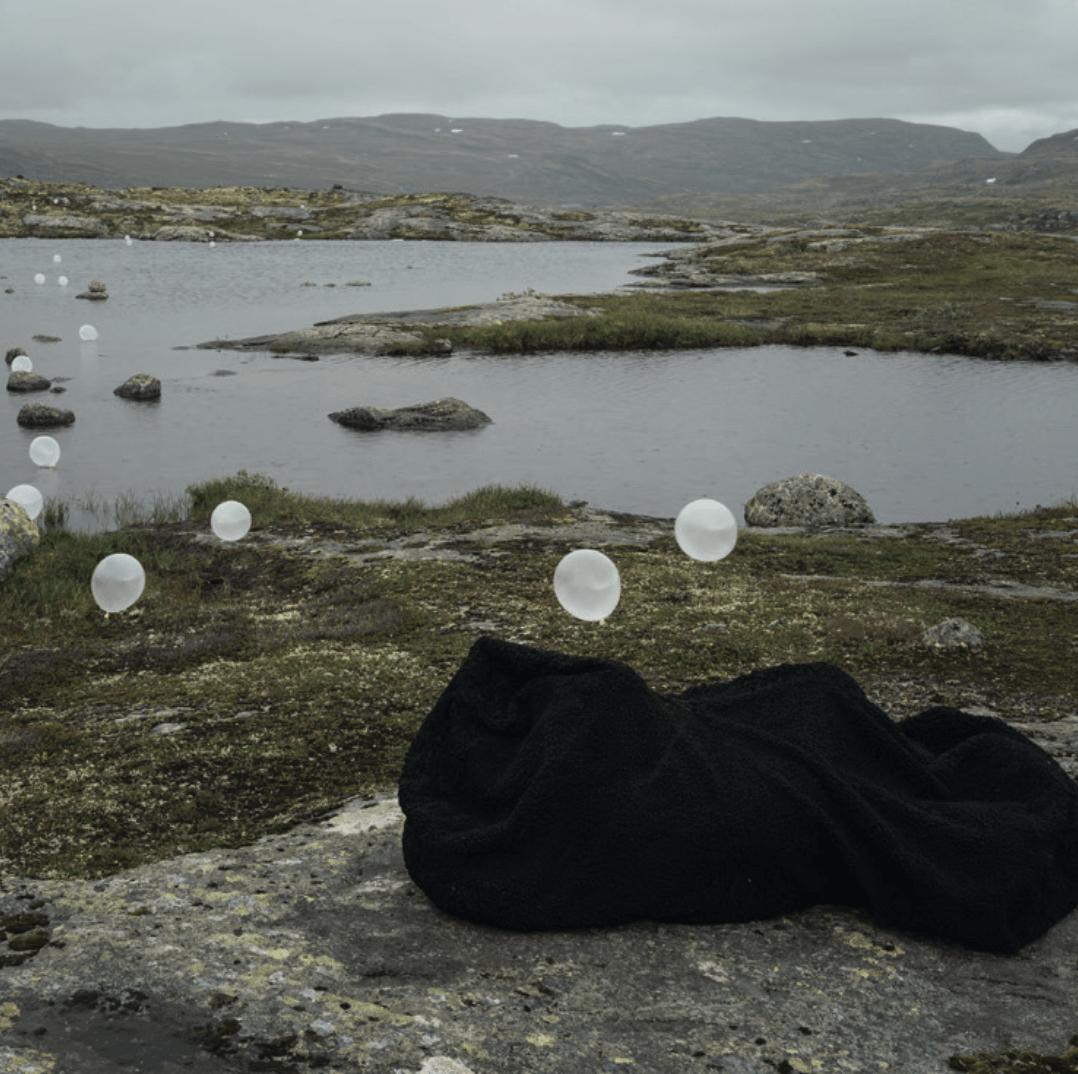 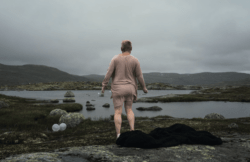 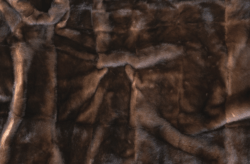 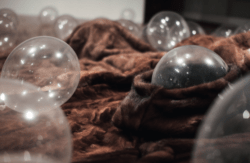 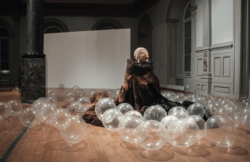