“Performance art is experience—shared time and space and actions between people,” as Marilyn Arsem puts it in her laconic 2011 THIS Is Performance Art manifesto read out by artist Agnes Nedregard in the course of her performative lecture. Nedregard together with Rita Marhaug are two artists and curators who organized Focus on Norway at Dimanche Rouge, at the Cité Internationale’s Maison de Norvège in Paris. This event hosted for a period of one week (March 2014) five Norwegian performer from Bergen and Oslo culminating in five solo performances.

Documented on video and in stills, the five consecutive pieces lasted between ten minutes and half an hour. By turns provocative, poetic, sensual and comic, each performance and performance artist—Rita Marhaug, Agnes Nedregard, Franzisca Siegrist, Anja Carr, and Kiyoshi Yamamoto (in order of appearance)—had its own way of claiming the audience’s attention. Overlapping formal, material as well as thematic concerns, beside the common catch-all theme of “Civilization and Human Nature”, point to a shared sensibility and working process.

TEXTILE
Traditionally the preserve of women (though by no means in all cultures), textile, the use of fabrics, materials or – in the case of Siegrist – thread, connects the practice of all five artists. Textiles, wallpapers and furniture items matching the artist’s fair skin colour frequently crop up in Marhaug’s performative and object-based work. Second Skin (2014) saw a see-through light tan sheet of sizeable proportions (15 x 10 metres) draped over the plain yellow brick façade of Point B Worklodge in Williamsburg, Brooklyn. A variation on the theme, Skin Deep at this event began with the still image of a vast expanse of flesh-coloured fabric loosely spread out on the polished concrete floor. Bulging dune-like at one end, beneath which the artist lay on her side in the spot light, the sheet conjured up a desert landscape, one which started shifting, causing the creases on its surface to deepen and form a wavy pattern, as the figure buried within its folds proceeded to slowly gather them round her at the outset of the performance.

BLINDNESS
In a public art piece titled Blind Artist (2013), Marhaug tentatively moved around the Giardini and the Arsenale area during the preview of the Venice Biennale, sporting a white outfit and white lenses which effectively blocked her vision. Staged as part of Infr’Action Venezia II, the durational performance was intended as a subtle comment on the rampantly ambitious artists who flock to the Biennale preview. Made for the occasion, the powerful image of the “blind artist” has since been repurposed in other contexts, among other in Skin Deep. Instead of the white clothes, the artist had a frilly cream-coloured dress on that she eventually discarded along with her matching heals. Wearing nothing but a beige body suit, she cautiously advanced towards the audience with her arms outstretched to gain equilibrium, revealing her frightening blank gaze as she moved her head from side to side, before exiting the room.

ANIMAL NATURE
With the exception of Yamamoto, the artists in the Focus on Norway series by and large tended to privilege non-verbal modes of communication. The longest of the five performances, lasting a little over 30 minutes, Carr’s Horseplay vaguely recalled the beginning of Marhaug’s Skin Deep. In both pieces the performer initially appeared as a hump bulging the fabric that hid her body from view even while suggesting its form. Marhaug’s skin-coloured shroud extended from the wall to a cube covered with a piece of tawny fur that fell round it in graceful folds.

When she eventually disclosed herself to the audience, Marhaug herself was wearing a head cover, resembling a fencing mask, and made of the same tawny fur as the one laid over the cube. Crepuscular (2013), a duo made in collaboration with Benedicte Clementsen, had both performers wear heavy mink coats in sweltering heat. For Marhaug, fur connotes danger, animality as well as femininity, owing to its touch- inviting softness. All those elements were at play in Skin Deep, which saw the artist cautiously advance on all fours, occasionally crouching, until she reached the cube and rested her masked furry head on it. Upright posture, the ability to stand up, is what marks out humans from other animal species. It was only once she stood on the cube that Marhaug cast off, one by one, sundry items of clothing she wore. Her mask came off at the very last, but not before the artist breathed heavily and audibly into it, filling it with air like a balloon.

DREAMS AND NIGHTMARES
With limited means, each of the five performances succeeded in creating its own distinctive mood and atmosphere by means of costumes, props, lighting. Each had a dream-like logic all its own, privileging certain senses, deploying its own vocabulary of ritualistic gestures, distorting perception to suit its own artistic needs. “For Art to be Reality,” wrote the anthropologist Margaret Mead in Art and Reality: From the Standpoint of Cultural Anthropology (1943), “the whole sensuous being must be caught up in the experience.” 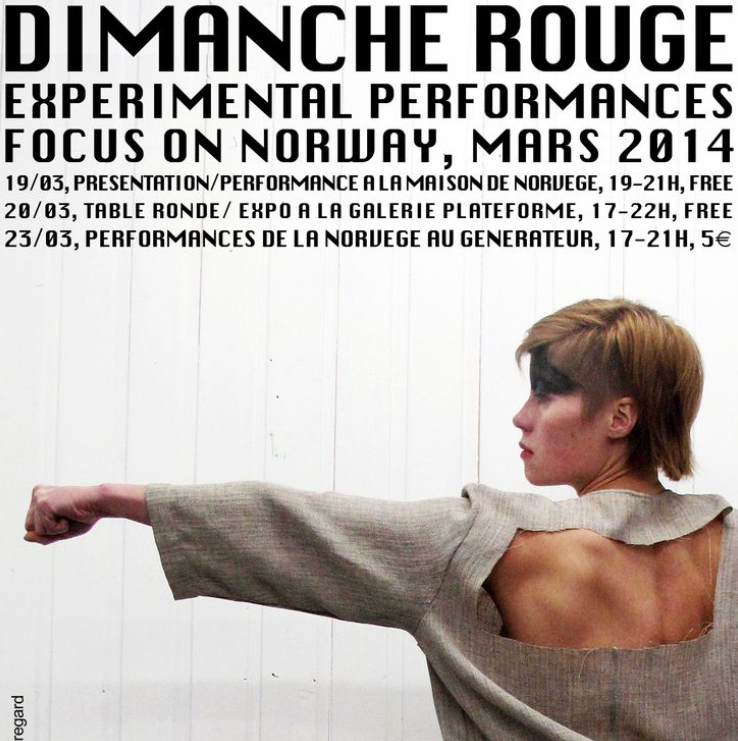 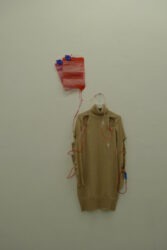 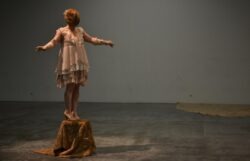