At PINK CUBE, Rita Marhaug’s works will communicate with the bodily pink walls and consist of three main elements: Black Persian fur (from new-born lambs of Karkul sheep), photographic prints displaying the relationship between humans and dogs in contrast to other animals and a performance exploring these elements further. The performance will take place at the opening and includes another material interacting with the space, continuing her Norwegian Liquid series. The series investigate the (female) body in relation to the fluids that drive the Norwegian economy. Coming from the same industry as the motif in Tru Solvang Vevatne’s work, this substance can potentially start a dialogue between the works. Apart from this liquid, Marhaug’s starting point for the exhibition has been the concepts of predator and prey and its variations: The lamb as image of sacrifice and at the same time savior in our culture, as a clear contrast to the relationship between man and its best friend; the dog. In her photographic series titled PREDATOR the presence of mink fur continues Marhaug’s use of skin, fur and textiles in previous performances, questioning the borders between our bodies and their surroundings as well as our ability for bodily communication. Marhaug’s approach to performance is through the everyday language of the body and it’s physical dimensions. Recently a stronger interest in allegorical methods and strategies has developed from her work on fur and animals, as material and motives.

At PINK CUBE True Solvang Vevatne will show two pieces. All ways (2016) is a sculpture made from knitted variations of the road sign “danger of accident” which show different kinds of car crashes. The knitted road signs are sewn together to form a chaotic and dysfunctional highway displayed on a structure of wooden boxes – in some way a hybrid of typical kids-carpets and toy-raceways with dystopic undertones. The use of soft threads, revealing the work’s handmade quality, meets the hard, wooden base of the sculpture and its car motifs that drive us in another direction. Vevatne’s second piece, Vacancy (2015), consists of a photograph, and a small everyday-object taken out from the installation shown on the photograph. As in Marhaug’s works, bodily surface as well as the repetition and move from two- to three-dimensional is strongly present: The walls of the documented room and the objects in it are covered with cowhide from Norwegian Red Cattle–a breed that is bred for its profitability. One of the references in the title is the vacant farms in the outskirts of Norway–Vevatne’s choice of including this work thus continues the dialogue on Marhaug’s topics, while the similarity in expression (the fur) perhaps adds a little confusion to the battle. 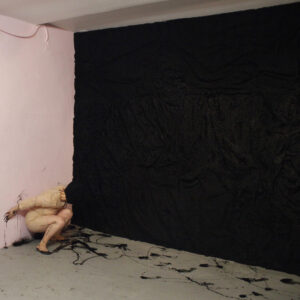 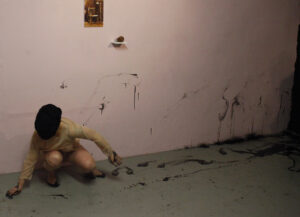 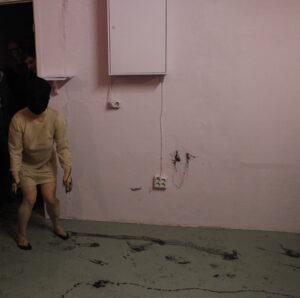 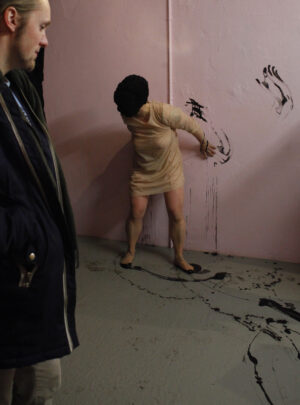